Remote Cocos Island is said to have inspired the adventure-filled settings of Treasure Island and Jurassic Park. Established by Costa Rica as a national park in 1978 and located about 500 kilometers off the country’s Pacific coast, the volcanic island is also recognized as a UNESCO World Heritage site. Encircling its dramatic shoreline are nutrient-rich waters carried by deep-ocean currents that rise as they follow the slope of the island’s undersea volcanic base. Such waters provide ideal feeding grounds for large predators.

Well-known to seasoned divers, the stars of Cocos Island’s aquatic show are the sharks: hammerheads, whitetip reef sharks, and others that congregate here in large numbers, contributing to one of the largest predator biomasses in the world. 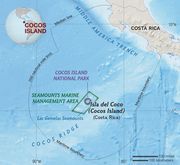 Working with leading marine scientists from Costa Rica and across the globe, expedition members tagged sharks to capture data on long-range migration, tracked sea turtles, shot underwater photos and videos, and measured the abundance of reef fishes and sharks.

The team also surveyed the ocean depths, becoming the first team to explore Las Gemelas—then located outside the protected area—by submersible. These seamounts, part of an underwater chain that stretches south to the Galápagos Islands, may be used by migratory fish as a marine highway between feeding and breeding grounds.

With summits hundreds of feet below the water’s surface, the seamounts are too deep for divers but not, as the team discovered, for fishing lines. Although smaller fish and organisms such as sponges, sea stars, and deep-sea corals were abundant, larger fish such as grouper were fewer in number than in the nearby MPA.

This national park is truly one of the treasures of the Pacific Ocean.

Though Cocos Island and its surrounding waters had been protected as a national park for decades, the expedition team found that illegal fishing was putting strong pressure on the protected area. Meanwhile, the unprotected seamounts were wrapped in miles of fishing line and showed smaller numbers of large fish.

In March 2011, Laura Chinchilla, then president of Costa Rica, declared the 9,640-square-kilometer Seamounts Marine Management Area, which encompasses Las Gemelas and nearby waters that are important for sharks and tuna. The area excludes purse seining for tuna entirely, while still allowing long-line tuna fishing in some of its waters. The announcement came after more than a year of discussions between the Costa Rican government and conservation organizations, including National Geographic.

In September 2016, current President Luis Guillermo Solís committed to an expansion of Cocos Island National Park by nearly 10,000 square kilometers, almost quadrupling the area where fishing is restricted. The expansion was the result of a trilateral agreement between Costa Rica, Ecuador, and Colombia to protect a critical migratory pathway for sharks and other large pelagic (open-water) species.