The area that makes up the Antarctic Peninsula, Scotia Arc, the South Georgia Islands and the South Sandwich Islands is one of the most productive parts of the Southern Ocean. Stretching out over 1,500 kilometers towards the tip of South America, the Antarctic Peninsula is the northernmost part of the Antarctic continent. The Antarctic Circumpolar Current provides a strong natural barrier, which results in these waters harboring a high percentage of diverse and endemic marine plants and animals. An estimated 75% of the krill population surrounding Antarctica resides in this area, supporting large breeding populations of penguins, seals, and whales.

This region is of particular interest to scientists and conservationists because Antarctica is one of the fastest warming places on Earth, and glacier retreat on the continent is causing environmental shifts that could significantly affect coastal seafloor ecosystems. 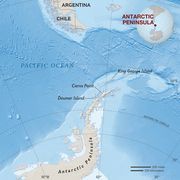 In partnership with the governments of Chile and Argentina, the Pristine Seas team conducted a scientific expedition aboard the Chilean Navy’s OPV Fuentealba to explore and document the unique biodiversity of the Antarctic Peninsula. The goal of the expedition was to fill scientific gaps by conducting research with methodologies and equipment that hadn’t been used in this region and exploring the biogeographic connectivity of Antarctic marine fauna and flora with those from Tierra del Fuego and its neighboring islands.

Working with leading marine scientists from across the globe, the expedition team traveled from King George Island, through the South Shetland Islands, and to the Danco Coast fjords and Doumer Island. To fully explore the area, the team carried out dive surveys to measure and describe the abundance and diversity of fish as well as life on the seafloor, including macroalgae and invertebrates. The team also used deep-water drop cameras to explore the largely unknown deep-sea realm surrounding the Antarctic Peninsula, specifically around unique geological features such as underwater canyons, seamounts, and ridges.