The Argentine island of Isla de los Estados lies 29 kilometers off the eastern extremity of Tierra del Fuego, aptly nicknamed the “End of the World.”

Named by Dutch explorers that encountered the island in 1615, Isla de los Estados has been protected both by its remoteness and its status as a nature reserve. Sitting at the eastern entrance to the Beagle Channel, the island has historically served as a station for seal hunters, a military prison, and a naval base, and is said to have provided the setting for Jules Verne’s novel The Lighthouse at the End of the World.

Far from its history as a seal-hunting outpost, Isla de los Estados today holds important feeding grounds for a variety of marine mammals, including the South American sea lion. Colonies of King, Magellanic, and rockhopper penguins can also be found on the island. The sea floor around the region is riddled with canyons and seamounts that are home to many endemic species of marine life, and giant kelp forests constitute a large part of this wild ocean ecosystem, harboring abundant biodiversity within and below their canopies.

The Pristine Seas team partnered with Argentina’s Ministry of Environment and Sustainable Development, Argentina’s National Parks Administration, the Government of Tierra del Fuego, and the Forum for the Conservation of the Patagonian Sea to carry out an expedition to Isla de los Estados and conduct comprehensive surveys of the health of this region’s marine environment. 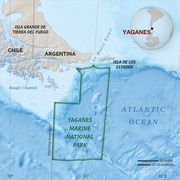 Over the course of this two-week expedition, the Pristine Seas team traveled from the port of Ushuaia through the Beagle Channel, along the southern coast of Argentina’s Tierra del Fuego, and around Isla de los Estados. Their aim was to study and film the marine ecosystems in this area, which is known to hold great biodiversity and an abundance of vulnerable and threatened species.

To achieve a comprehensive survey of the environment, the team made scuba dives to depths of up to 30 meters, used remote underwater video and open-water cameras, and deployed deep-sea drop cams to depths of over 2,000 meters.

In 2017, the government of Argentina announced its intention to create five new marine protected areas. Pristine Seas, the Foro para la Conservación del Mar Patagónico, and Tompkins Conservation partnered to assist the government in the creation of the two first reserves. The Pristine Seas expedition to Tierra del Fuego produced scientific knowledge and a documentary film that informed the creation of the Yaganes marine park, and provided deep-sea exploration technology to another Argentina-led expedition to the deep Namuncurá-Burdwood Bank.

In December 2018, the Argentinian parliament approved a bill creating the two protected areas, which cover a total surface of 96,000 square kilometers. These areas protect productive grounds for deep fish such as hake and Patagonian toothfish, and feeding grounds for threatened whales, sea lions, fur seals, and seabirds.