When Portuguese explorer Vasco da Gama arrived in present-day Mozambique’s port city of Inhambane in the late 15th century, he’s said to have experienced such friendliness from the locals that he called it Terra da Boa Gente—“land of the good people.”

Today, Inhambane retains its unique charm on a stretch of southeast African coastline that’s in flux. The waters surrounding its bay are home to one of the world’s largest concentrations of marine megafauna, including manta rays, whale sharks, and bull sharks, as well as regionally endangered dugongs. But climate change has delivered record flooding, which has in turn brought enormous quantities of freshwater, silt, and debris into the sea. Meanwhile, coastal development and offshore oil and gas drilling further threaten the region’s pristine reefs, which exist on the border between subtropical and tropical climate zones. 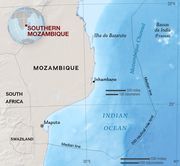 In April 2014, a group of key scientists and filmmakers embarked on a Pristine Seas expedition to explore, survey, and document the area's terrestrial and marine ecosystems. Together with National Geographic Emerging Explorer Andrea Marshall and the Marine Megafauna Foundation, the team conducted a comprehensive, quantitative assessment of some of East Africa’s healthiest reefs.

Beginning at Zavora Point in southern Mozambique, the expedition traveled 350 kilometers north along the coast to the Bazaruto Archipelago, part of a marine national park established in 1971. Along the way, they experienced a gradient of reef life, beginning with the cooler, subtropical reefs of the south—dominated by soft corals—and concluding in the tropical north, where hard corals thrive in the warm Indian Ocean.

To uncover the mysteries of this important transition zone, team members made first ever dives to remote reefs and seamounts to survey their rich marine biodiversity. In places they couldn’t dive, drop cams were deployed to film the deep sea.

What they found was a bounty of flora and fauna, including corals, kelp forests, manta rays, triggerfish, honeycomb moray eels, dugongs, whitetip reef sharks, and dense schools of snappers. In Bazaruto, potato cod—a type of grouper that’s larger in size than the average team member—shared the reef with bull and leopard sharks and colorful butterfly fish.

Despite the rich biodiversity they encountered, the team noted that reefs in areas such as Tofo, near Inhambane Bay, while healthy, were also suffering from the effects of fishing pressure.

The ocean here is a globally significant biodiversity hotspot…

Singing fishermen prove to be the ideal alarm clock. Parrot fish crunch away on coral—and create sandy beaches in the process. A young octopus misbehaves in an underwater nursery. An astonishing discovery is made … about kelp. Suspicious dugongs are seen, then gone. Acoustic tagging lets us in on the secret lives of manta rays. And this is a really big fish.