In the remote Pacific Ocean, a chain of coral islands and atolls straddling the Equator make up the ecologically diverse Line Islands. South of the Equator—called “the line” by sailors—lie five tiny isles: Malden, Starbuck, Vostok, Flint, and Caroline (or Millennium), known collectively as the southern Line Islands. Part of the Republic of Kiribati, these specks of land are located between 2,400 and 3,300 kilometers south of Hawaii.

They are among the most isolated atolls on Earth. They are rarely visited. No person calls them home. And while they were exploited for resources in the 19th and 20th centuries, the waters around them have remained among the wildest places in the ocean. 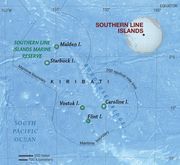 During the spring of 2009, two years after wrapping their expedition to the northern Line Islands, a team of scientists led by Pristine Seas founder Enric Sala returned to the central Pacific. Over a period of six weeks in the southern Line Islands, they observed and documented water quality, fish populations, and the health and diversity of the coral reef—the most diverse tropical marine ecosystem.

The expedition was the first comprehensive study of its kind. The team’s goal: to establish a baseline model for healthy coral reefs in order to quantify the effects of human activity on these ecosystems and to devise a blueprint for the conservation of degraded reefs.

Spending more than a thousand hours underwater, divers discovered dense, healthy corals that covered 90 percent of the seabed. Coral coverage in the Caribbean, by comparison, is just 5 to 10 percent. And the food web, top-heavy with predators, showed the “inverted biomass pyramid” that the team first discovered at Kingman Reef in the northern Line Islands—a sign of reef health.

Meanwhile, renowned terrestrial ecologist and conservationist Mike Fay conducted land transects on the islands to gauge the human influence on their living ecosystems.

Diving in the southern Line Islands is like getting in a time machine and traveling back to the reefs of the past, when sharks—and not humans—were the top predators.

Following the expedition, Sala presented the team’s findings to the government of Kiribati. He used scientific data, photographs, and video from the expedition to inform policymakers about the island nation’s natural heritage and the need to preserve the archipelago for future generations.

At the 2014 Our Ocean conference hosted by the U.S. State Department in Washington, D.C., Kiribati President Anote Tong announced that a 12-nautical-mile area around the southern Line Islands would be closed to commercial fishing beginning in 2015.

The team sets sail on the Hanse Explorer. On dives, the sharks don’t bite but red snappers and moray eels do. Mike Fay makes a harrowing attempt to swim ashore at Flint. Enric becomes marooned on Starbuck Island with a broken toe. Excited dolphins buzz the team during a shark count off Malden Island. Millennium Atoll’s Napoleons are dynamite. A lagoon mystery emerges.