The rugged, inhospitable Ilhas Selvagens, or Savage Islands, have frustrated centuries of colonization attempts. Located nearly midway between Madeira and the Canary Islands in the North Atlantic, this small archipelago is today Portugal’s southernmost territory, comprised of two main islands and multiple islets that remain uninhabited by all but a hardy few.

In recognition of their importance as a nesting point for numerous bird species—including the Atlantic’s largest breeding colony of Cory’s shearwaters—the Selvagens were designated as a natural reserve by Portugal in 1971. They’re now part of the country’s Madeira Nature Park, whose rangers are the sole occupants of the remote outpost, sharing the harsh landscape with the endemic Selvagens gecko.

Offshore, shipwrecks litter the marine landscape, the work of violent oceanic swells that, while dangerous on the surface, also churn up nutrients below, creating a rich environment for sea life. As part of the nature park, the islands’ surrounding waters are protected out to 12 miles and to a depth of 200 meters. 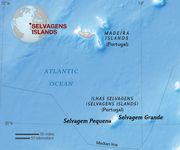 Little was known about the Selvagens’ undersea environment prior to the September 2016 Pristine Seas expedition, launched in partnership with the Waitt Foundation. But over the course of the ten-day expedition, the team found that the open waters around the islands appear to be a vital waypoint for migrating fish and mammals in the Atlantic and that intermediate depths and reefs may serve as important nursery habitat.

To make these assessments, the team conducted what was among the first underwater surveys of the ecosystem—from the shallows to the depths—and filmed the biodiversity around the islands. Using high-tech equipment such as midwater pelagic cameras and drop cams, the team was able to assess pelagic communities and deep-sea habitats in addition to the shallow flora and fauna observed during dives.

Together, the deep and midwater cameras deployed on the expedition captured some of the Pristine Seas project’s most impressive footage of underwater diversity.

What better connection to the ocean could we have than to feel its immeasurable power by being rolled around in a beautiful wave in the middle of the ocean, on the summit of a seamount, surrounded by grunting fish?

In May 2016, the scientific results of the expedition, as well as a documentary film, were presented in Lisbon and Madeira. Pristine Seas continues to be actively involved in efforts to ensure that the Selvagens are protected.