In the remote Pacific Ocean, nearly 2,000 kilometers south of Hawaii, a chain of coral islands and atolls straddling the Equator makes up the ecologically diverse Line Islands. The chain’s five northern bodies range from uninhabited, U.S.-owned Kingman Reef to 5,000-plus-population Kiritimati (Christmas Island), one of the easternmost islands of the Republic of Kiribati.

The waters surrounding the northern Line Islands preserve some of the world’s most pristine habitats and are home to proportionally more top predators than any other area studied in the world. Near-pristine Kingman Reef is a rare ecosystem virtually unaffected by humans and little changed from its condition hundreds of years ago. It is, as the team experienced it on multiple expeditions, a place out of time. 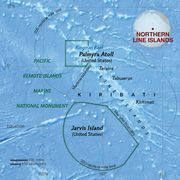 Pristine Seas founder Enric Sala and a team of scientists traveled to the northern Line Islands in 2005 and 2007. They set out to establish an ecological baseline for healthy coral reefs and to identify what impacts human activity has had on the islands’ marine ecosystems.

Sala chose the northern Line Islands for his first series of expeditions precisely because they provide a gradient of human impact, from very degraded marine life surrounding the most populated islands to a virtually intact ecosystem around uninhabited Kingman Reef.

On their first trip to the reef, divers found something unexpected: an unusual food web in which large predators such as sharks formed nearly 85 percent of the fish biomass (or total weight). The team named this an “inverted biomass pyramid.” Here, sharks rule an underwater landscape where prey keep out of sight and replenish through rapid growth and reproduction. It’s what a healthy reef should look like, and Sala estimates that there are perhaps only 50 in this condition worldwide.

If the large carnivores are removed through overfishing, the domino effect on the food web can have major ramifications, especially as ocean temperature and acidity levels rise. Overfishing, says Sala, is ecological sabotage.

The 2005 and 2007 expeditions provided scientific support for the protection of the islands, and in January 2009 President George W. Bush proclaimed a group of seven U.S. territories (including Kingman Reef and Palmyra Atoll in the northern Line Islands) as the Pacific Remote Islands Marine National Monument. Five years later, in September 2014, the Obama Administration announced an expansion of the monument, creating what was at the time the largest marine reserve in the world.

The Pacific Remote Islands Marine National Monument is now more than 1.2 million square kilometers, about three times the size of California and six times larger than its initial size. The newly expanded monument is also larger than the sum total of all U.S. national parks on land.

Commercial fishing, dumping, and mining are prohibited in the reserve, but boaters may visit the area with permits.