Located mid-way between Brazil and Africa, Ascension Island is a tiny volcanic island in the South Atlantic. Here, the deep sea and the remote mountains collide, leaving the island as the small visible tip of a massive 3,200-meter mountain. Ascension Island sits on the Mid-Atlantic Ridge, part of the longest underwater mountain range in the world.

Originally settled by the British in 1815, Ascension is one of three islands in the St. Helena U.K. Overseas Territory: St. Helena, Ascension and Tristan da Cunha. The island is known to be a global biodiversity hotspot: In addition to 44 endemic species, a number of important fish species, including bigeye tuna, yellowfin tuna, albacore tuna, swordfish, marlin, sailfish and blue sharks are present in the waters around the island. 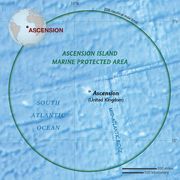 In collaboration with the Ascension Island Conservation Department, the British Antarctic Survey, the Royal Society for the Protection of Birds, and The Blue Marine Foundation, the Pristine Seas team recently conducted an expedition to explore, survey, and document Ascension Island’s offshore and deep-sea environments. Aboard the Antarctic research ship, the RRS James Clark Ross, the team sailed nearly 2,000 kilometers from Recife, Brazil to Ascension Island, where they completed a comprehensive science survey of the deep ocean surrounding the island including the isolated biodiversity hotspots—the seamounts.

The team used remote imaging deep drop-cameras and pelagic cameras along with a full range of remote sensing equipment including scientific trawls, plankton nets, acoustic arrays, and CTD’s to measure temperature, salinity and depth. They also used lander cameras and Swath bathymetry to accurately map the seabed and seamounts.

On August 24, the Ascension Island government announced plans to designate the island’s waters as a marine protected area (MPA). The designation would make it the largest MPA in the Atlantic Ocean covering 440,000 square kilometers, an area roughly the size of California. Once implemented, the area will receive the highest level of marine protection by banning commercial fishing and extractive industries.

Once established, Ascension Island MPA will be the 22nd marine reserve sparked by the work of the Pristine Seas team.

Updates from the Ascension Island Expedition